Email ThisBlogThis!Share to TwitterShare to FacebookShare to Pinterest
By Nadia Marques de Carvalho
(London School of Economics Palestine Society)
On the 3rd March 2011, the Chair of the Union of Jewish Students Alex Dwek claimed there was a rise of anti-Semitism on British campuses, coupling this with a rise of extreme anti-Zionist rhetoric: notably the two are very different but naturally it is easier to just stamp all anti-Zionists as anti-Semitic. He accused all pro-Palestinians as being “far-left and radical Islamists” who seek to corrupt our universities with “hate speech” such as the controversial LSE event with Abdel-Bari Atwan (which was after investigation deemed not anti-Semitic). Nonetheless the Hasbara Handbook (a guide to pro-Israeli Activists) claims that at times like this one must “neutralize negativity”. Ergo the Zionist “Battle Bus” sent for war on British University Campuses.
This Zionist “Battle Bus” is made up of 25 students exported from Israel who are travelling the campuses of London, Leeds, Manchester and Birmingham as part of the “largest pro-active pro-Israel campaign in recent years to mark Israel Awareness Week. Smart, but dirty propaganda Mr. Lieberman. Again this is rather ironic, as one does not need such campaigns to be aware of Israel, their “defense campaigns” in Gaza attracting the attention of Amnesty International and the Human Rights Watch as well as the foreign media does well in making us aware of Israel. This is a move to counter the International campaign of Israeli Apartheid Week, which seeks to educate people about the apartheid policies in Israel against Palestinians, noting that Israeli Apartheid Week does not endeavor to delegitimize Israel, as fortunately Israel does this for herself. 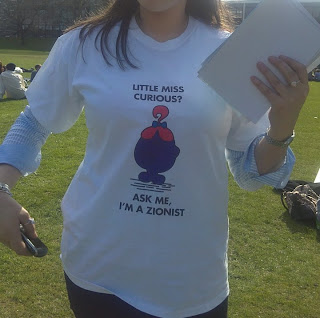 The Birmingham Jewish Society has described this Israeli propaganda as seeking to provide an alternative narrative that focuses on the “core principals of the region –‘Peace, Reconciliation and Cooperation.’” Is this naïve or a desperate and patronizing bid to blind British students of Israel’s actions? Cooperation – well this was exactly what the Palestine Papers showed us, with the Israeli Government flagrantly refusing any compromise with the Palestinian Authority, even when they offered Jerusalem. Reconciliation – this is why Israel has broken all recent ceasefires with Hamas and planning Operation Cast Lead II, despite fervent international condemnation. Peace – exactly what Zionism promotes, right? But in reality what happened between Tuesday 22nd – Thursday 24th March? At Birmingham University the Zionists set up their wooden bridge, which was supposedly meant to emulate their “core principals” and they danced, gave out free falafel and sandwiches as well leaflets: a pretentious attempt to create a little peace-loving Israel. Simon Furse of the Birmingham Palestine Society has described it as a “complete failure” especially as they were trying to distort what was happening on the ground by claiming, "civilian casualties on both sides of the conflict are about equal." The Birmingham Jewish Society also hosted an event entitled “meet the Zionists,” where by accounts of attendees described the Zionists as “nice and open-minded individuals who didn’t always agree with the actions of their government” however another attendee records that “whenever someone from the audience criticized Israel they were quick to switch the topic and point to the corrupt Arab states especially Saudi Arabia out of all 24 countries. But at least we acknowledge our governments are corrupt and we are trying to change that with the Arab Uprising, whilst they are trying to cover it up and justify their government’s crimes.” In response to the Zionist Bus, the Birmingham Palestine Society set up a mock checkpoint which attracted much attention from students however it was reported that the Israeli camera crew would not stop filming the pro-Palestinian activists, and were intimidating many people who wanted to ask questions to the pro-Palestinian activists. 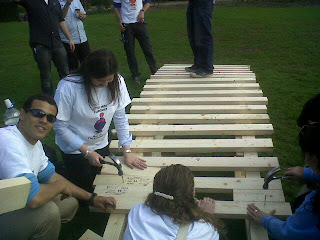 The Zionist “Battle Bus” also took their war to Goldsmiths University campus whereby the President of the Goldsmith’s Palestine Society, James Haywood described the event as so: "Without prior permission, a large group of Israeli students arrived on a battle bus to Goldsmiths on Monday (21st March 2011). They attempted to set up a marquee, which was promptly stopped by security, and then spent over an hour nailing together a five-foot bridge, causing complaints from nearby classrooms and utter confusion to the majority of students. The bridge was then moved to a distant spot on the backfield, and little more than leafleting took place. From the texts I was receiving and a glance at Facebook it seemed the majority of students were disgusted at what was taking place - whitewashing of Israel and vicious attacks on those who supported boycott. In the end we had students crying from the intimidation they had received from these Zionist students, and our Palestine stall at the Multiculturalism day event at the Student Union became filled with students wanting to read up our literature and buy things in solidarity." Goldsmith's Palestine University also carried out a mock checkpoint in response, reminding Zionist activists that it wasn't as simple as they were portraying all to be.
As Pro-Palestinian activists we must, and I believe we do, strive to understand the Zionist narrative, as it is quintessential to peace, as with this understanding that we can commit to dialogue. However such low and aggressive tactics by the Israeli State do not stretch the olive branch out any further. Indoctrinating British students with a dishonest and fabricated story of how Israel is committed to “Peace, reconciliation and cooperation” are not only contrary to its policy in the Occupied Territories but also highly distort and debase the truth. Instead of parading around British Universities as Lieberman’s mouthpiece building five-foot wooden bridges, handing out free falafel (which would do far more good to the thousands of hungry Palestinian orphans in Gaza) and simplifying the idea of peace by handing out pieces of the chocolate “peace cake”, these “nice and open-minded Zionists” should commit themselves to learning the Palestinian narrative, condemning Netanyahu’s promise of an Operation Cast Lead II and reading up on the human right’s and international law violations of their beloved Israel. 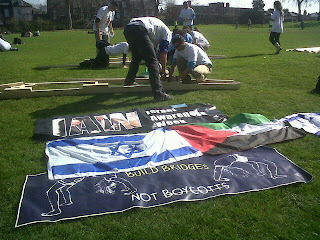 It is only natural that we all have a strong affinity with our countries, promise to protect her regardless and only want the best for her children; especially in the case of Israel where because of many reasons she has been highly disliked and threatened with liquidation. However I call out to all Israelis, Zionist or not, we all have an obligation towards humanity. When your country is murdering civilians behind the veneer that it is attacking Hamas’ military arsenal even though three babies end up dying (perhaps they were playing with some Molotov cocktails) and your country flagrantly defies international law with an iron wall, 146 illegal settlements, a siege on its occupied territory and constant bombardment of innocent civilians, but justifying all this under the false pretense that the Israeli Supreme Court says it is all in self-defense, you must stop and ask yourself whether violation of basic human rights can ever be justified with self-defense: forget international law, I am appealing to your moral conscience.
This is why a Zionist “Battle Bus” does nothing for peace, nothing for truth and nothing for justice. If Israel is sincere in wanting peace then it will firstly have to help the Palestinians, and it is only this way that pro-Israeli activists and Israel, will attain the core principals that she supposedly strives for, “peace, reconciliation and cooperation.”
Posted by LSE SU Palestine Society at 18:21