Email ThisBlogThis!Share to TwitterShare to FacebookShare to Pinterest
By Mira Hammad
A piece on ethical financial management in light of the LSE-Gaddafi debacle.
“Vanity Fair” is not a novel about the disintegration of morality. As Thackeray’s characters enmesh each other in swirls of betrayal and duplicity, questions of morality are still important to them. The nightmarish absence of ethical constraint which wreaks havoc throughout the novel results from the subversion of those questions into questions of reputation rather than substance. In other words, morality still exists as a semantic concept but its outward focus on appearance transforms its essence into hypocrisy with a halo. 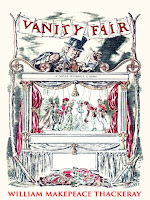 The popularity of Thackeray’s satirical portrayal of the underbelly of human nature is not simply due to its capacity to shock and entertain. Its real attraction lies in the reader’s uncomfortable recognition of this inclination towards two-facedness in themselves. Despite this, there is no society, ideology or belief system that endorses hypocrisy. I am not here suggesting that no ideology creates hypocrisy or that no society is based on it; rather the striking fact is that nobody admits to it. Its formal rejection seems to be a moral constant. Our revulsion of hypocrisy seems to be just as inherent a part of us as the selfishness that creates it.
This moral value therefore has as much of a potential to unite people as does its antithesis to divide. We can see this in the microcosmic world of our university. The diversity of views about what the LSE is and what it should stand for as an institution is as wide as its membership. All of us, however, agree that whatever direction the LSE takes, its nature should not be hypocritical.
It is from the perspective of this common value that we should consider the LSE-Gaddafi debacle. Indeed, in our reaction to the media furore we have already been very quick to see hypocrisy and to criticise it. But our perception in this regard has been limited to acknowledging the duplicity of members of a government that itself built links with the Gaddafi regime criticising the LSE for doing so and that of the media which did not care about the donations when they happened criticising us for taking them.
Our consideration of the part that the LSE played in the affair seems to miss this morality-based analysis. From Howard Davies’ resignation statement, to the EGM motion subsequently passed, to student discussion in The Beaver, the main concern with the Gaddafi-LSE links seems to be portrayed as a reputational one necessitated by unwelcome media attention. The real question, however, surely revolves around whether the LSE should be trading on a reputation that it does not deserve.
Perhaps the reason we have failed to appreciate this is because we have bought into the paradigm presented by the media that focuses narrowly on the Gaddafi-LSE links simply because it is newsworthy to do so. In order to really learn lessons from what has happened, we need to refocus our lens and realise that the issue is much wider. It is not just the issue of promoting democracy and academic freedom while building links with ruthless dictators, it encompasses the hypocrisy of hosting lectures about human rights in The Sheikh Zayed Theatre. It is an issue of holding investments in arms companies while establishing human rights centres.

In short, the real issue here is a truly moral one, not simply a reputational one and it revolves around the hypocritical way in which the LSE manages its financial transactions. The LSE outwardly trumpets its adherence to a Socially Responsible Investment Policy (SRIP), as a sign that the principles it promotes govern its financial transactions. This is strikingly disingenuous because the SRIP is in actuality so vague that it is rendered meaningless. The only real constraints that the SRIP imposes are those found in the 6 UN Principles, established in 2006. That the SRIP has been motivated by reputational, not ethical concerns becomes evident when we consider the fact that these principles have been so widely recognised as being unacceptably vague by the academic community and NGOs that the UN has itself been moved to introduce new principles, the Ruggie Principles. General requests that companies take into account environmental, social and corporate governance issues in their financial management is about as far as the original 6 principles get and, according to recent events, the LSE appears to have taken full advantage of the flexibility of this. Even though the LSE could not have foreseen the Gaddafi scandal emerging, signing itself up to such a lax SRIP was an inherently hypocritical act and its hypocrisy is not diminished or increased by whether or not it receives media attention.
But, returning to the point of analysis with which we started, we find that looking for hypocrisy with a self-critical eye necessitates widening our focus even further. Looking candidly at the issue of financial management confronts us with the uncomfortable truth that responsibility for the direction of our university lies not only with Howard Davies, the Senior Management of the school or the school’s governing bodies. Rather it also lies with the students themselves. Before criticising the LSE’s SRIP we need to recognise that our own Student’s Union, despite paying lip service to environmental and ethical causes does not have any form of ethical restriction on its financial transactions. The first port of call, then, in any attempt to resolve these issues, is to amend the LSESU’s own approach to financial management. 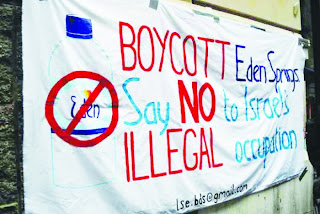 It is clear that there is an increasing appetite not only in the student body, but in the School as a whole, to reassess our approach to ethical financial management. The recent success of the campaign to remove Eden Springs from our campus serves as a powerful indicator of this and the support already shown for the motion calling for ethical financial management, which is being presented at the UGM this Thursday, is also heartening. We now need to take successful ethical financial policies as our example and realise, like the characters in Vanity Fair, that hypocrisy does not necessarily lead to victory.
Posted by LSE SU Palestine Society at 14:35