Email ThisBlogThis!Share to TwitterShare to FacebookShare to Pinterest
By Lukas Slothuus 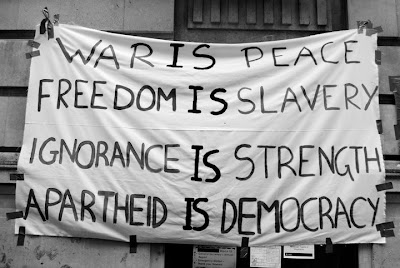 The Palestine Society's 'Blue Land Settlement' taking place Thursday to Friday last week was a much-needed change in atmosphere on Houghton Street after a Lent Term 2011 that has seen a range of controversial events unfold at LSE. 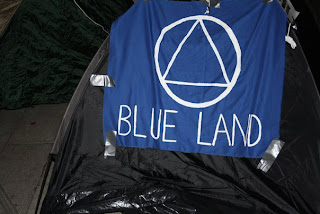 There are surely many different opinions about Thilo Sarrazin, the German anti-immigration speaker; Abdel Bari Atwan, the critic of the US Zionist lobby; Roberto Maroni, the Italian minister from the fascist party Lega Nord who was due to speak this week; the blood and oil-money received from Gadaffi; and an endless list of other controversial issues. But the real litmus test of a politically engaging student society is whether it is able to draw in new people to support its cause, build connections with other groups in London and abroad, and engage with academics at the LSE to further the aims of the society. 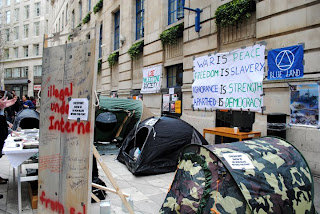 Here at the LSE, the Palestine Society is doing all of that, most recently exemplified by the 'Blue Land Settlement' where committed students set up a makeshift tent camp on Houghton Street symbolising a West Bank settlement. With educational settlement walls, a stall with information and sign-up sheets for the society’s mentoring scheme and divestment campaign, it pursued what the Society and broader society should call for: Justice for Palestinians and a long-lasting peace solution in the Middle East.
It is hardly possible to find a more timely situation for a peaceful 24-hour demonstration against the Jewish settlements in the West Bank. People are dying on both sides of the settlement boundaries as you read this sentence. It is in the interest of both Israelis and Palestinians for indiscriminate killings to end. But as the occupying force, it is the responsibility of Israel to do what the US government and essentially all other governments around the world as well as the UN and the EU have called for: an end to the illegal settlements. It is not the fault of Jewish settlers that their government is unable to negotiate a sustainable solution to the unrest. And it is definitely not the fault of Palestinian families who are driven away from their homes because an extremist Prime Minister in the neighbouring country uses a scripture to justify the forced removal of civilians. 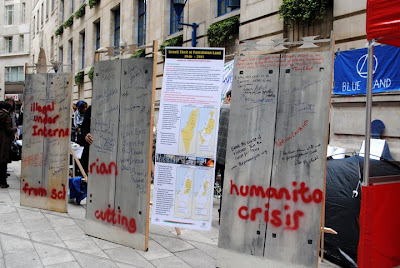 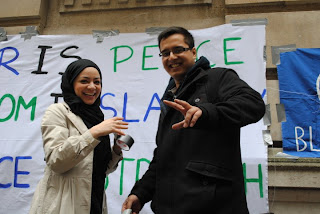 The Blue Land Settlement was an educational and social tool to highlight the conditions under which millions of people are living due to inept governments, corrupt pseudo-religious politicians abusing Holy Scriptures, a brutal military force, billions of US aid, racism, and so forth. Just like the black resistance in South Africa was labelled a terrorist movement by Western governments due to its strategy of violent resistance and racial liberation, the Palestinian resistance is also labelled religiously extremist or terrorist. Peace dealings with "impartial" negotiators have become a euphemism for business as usual. But the outrageous consequence of this is a lose-lose scenario which nobody ought to accept. Jews and Muslims believe in the same g-d and a great deal of the Torah and the Qur’an deal with the same characters, stories, and messages. It is thus outrageous to say that these people are fundamentally opposed to peace. And if there is one thing Jews and Muslims should be able to co-identify with it is the state of intense persecution, from the Alhambra Decree that expelled Jews from Spain to the current scape-goating of Muslims in Europe. This must mean a commitment to peace from civil society. 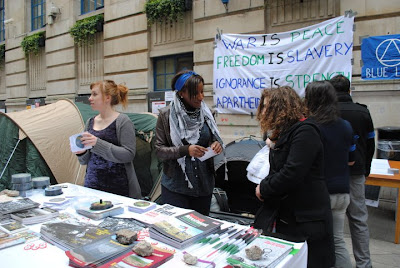 As students in the UK, little can be done about the suffering of innocent civilians in a land far away. But it is our duty as students, the group of people who have led all liberation, resistance and justice movements in the last two centuries to do the small things we can do. And that is what the Blue Land Settlement sought to do. 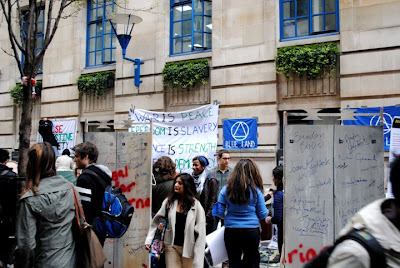