Too complex? I'll make it simple for you.

Email ThisBlogThis!Share to TwitterShare to FacebookShare to Pinterest
0 comments
Yasmin Ahmed
(LSE SU Palestine Society)
Last Monday (20th February) marked the start of Israeli Apartheid Week (IAW), an annual international series of events held in cities and campuses across the globe with the aim of highlighting the apartheid nature of the state of Israel and to raise awareness about the daily struggles that are faced by Palestinians as a result. 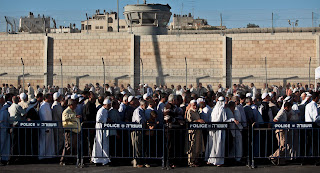 As such, the Palestine Society marked this week by reenacting an Israeli checkpoint on Houghton Street, with the aim of highlighting one of the many obstacles that are systematically designed and implemented by Israel to degrade and restrict the lives of Palestinians. The response to our stunt was overwhelmingly positive, with numerous individuals including staff and non-LSE passersby expressing their appreciation and solidarity with our efforts and the message we were manifesting.
However, this was all completely ignored as attention was immediately diverted away from the very distressing and brutal reality in Palestine to “Violence on Houghton Street”, following the bombardment of the stunt by four students who decided to throw water bombs towards us, with one missile hitting a member of the society directly in the face. In the aftermath of the shameful yet very telling attack on the checkpoint reenactment and on members of the Palestine Society, and as an attempt to rationalize and thus excuse the deplorable behaviour of the attackers, we were accused by the Israel Society of trivializing a very “complex situation for both sides” and that we shouldn’t have been surprised about the attack because we had “intimidated Jewish students” by holding “oversized guns”. Too complex? I’ll make it simple for you. 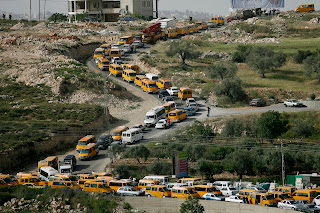 According to a September 2011 report compiled by the United Nations Office for the Coordination of Humanitarian Affairs in Occupied Palestinian Territory (OCHAOPT), there are currently 522 roadblocks and checkpoints in the West Bank. This is in addition to an average of 495 ad-hoc ‘flying’ checkpoints that were put in place in every month of 2011 which further obstructed movement across the West Bank. As a result of this, 200,000 people from 70 villages are consequently “forced to use detours between two to five times longer than the direct route to their closest city”. And it doesn’t stop there. According to MIFTAH, the Palestinian Initiative for the Promotion of Global Dialogue and Democracy, between September 2000 and April 2011, 401 Palestinians died at checkpoints as a result of preventing medical personnel at Israeli checkpoints, and there were 32 stillbirths at checkpoints. 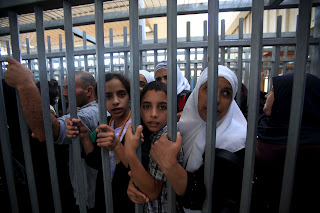 Furthermore, the 62%-completed “security fence” that Israel is currently building ‘along’ the West Bank has 80% of its route built inside the West Bank, on Palestinian territory. Why do we call this “fence” an Apartheid Wall? Because in actual fact, it is a 26 foot concrete wall which serves to isolate Palestinian communities and families in the West Bank and entrenches the annexation of Palestinian land by Israeli settlements, which were deemed illegal by the International Court of Justice in 2004 and are considered by the international community as a flagrant violation of Article 49 of the Fourth Geneva Convention which stipulates that “the occupying power shall not deport or transfer parts of its own civilian population into the territory it occupies”. 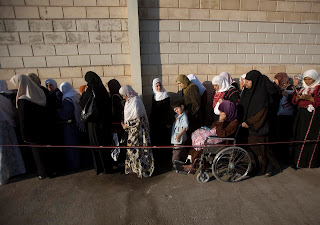 This is not a distortion. This is not disputed. And it is certainly not complex. These are quite simply the facts. Our stunt, described as a “disgusting simplification” by the Israel Society, doesn’t even begin to come close to fully highlighting the pain, suffering and humiliation that Palestinians are put through every single day as result of checkpoints, the wall and the continued occupation of their land. If staging a mock checkpoint and holding oversized guns was offensive and intimidating for some, then how should they be feeling about the fact that there are hundreds of actual checkpoints guarded by IDF soldiers armed with real guns that Palestinians are greeted with on their way to university, work or to the hospital?
What happened this week on our campus does not indicate a need nor a desire for dialogue. The attack on the stunt was a clear-cut case of inexcusable bullying, physical intimidation and a shameful interference with the right to free speech and freedom of assembly. Moreover, the assault was particularly offensive to the Palestinian students who were involved in the stunt, some of whom are from Gaza, who have lived through and witnessed the utter criminality, terror and injustice imposed upon their families by Israel. To come to study in the UK and suffer this degree of intimidation and bullying from supporters of Israel on our campus is appalling.
If this incident has taught us anything, it is that when confronted with the reality of an unjust, illegal and inhumane set of state policies that systematically discriminates against Palestinians and seeks to strip away every shred of their dignity, those on the side of the oppressor are left with no ammunition. Except for water bombs.
Posted by LSE SU Palestine Society at 07:13

Right 2 Education Project gets underway at the LSE!

Email ThisBlogThis!Share to TwitterShare to FacebookShare to Pinterest
6 comments
Yasmin Ahmed
LSE SU Palestine Society
On Tuesday 21st February, Dr Marco Pinfari from the International Relations Department at the London School of Economics delivered the first in a series of five lectures being broadcast to students in Gaza as part of the LSE SU Palestine Society's 'Right 2 Education' Campaign.
Tuesday's lecture, "An Introduction into International Relations Theory" was broadcast live via Skype to the students from the Islamic University of Gaza (IUG), a university that the LSE Students' Union is currently twinned with. Students from the IUG were gathered in one of their lecture theatres as Dr Pinfari gave an overview of the different schools of thought within International Relations and how they translate into state policies. The 40-minute lecture was followed by an interactive Q&A session, during which students came up to the stage to ask Dr Pinfari about further readings and how certain points he raised can be linked to the Palestinian struggle.
Isra Migdad, one of the students in Gaza who attended the lecture said that "Dr Pinfari simplified the three concepts of realism, liberalism and marxism and the handout he provided was very useful. I'm looking forward to the next lecture, where Dr Pinfari will link the three concepts to the Palestinian issue".
The next in this series of lectures will again be delivered by Dr Pinfari next week, followed by three further lectures from professors in the Law and International History departments.
For more information about this student-led project and to get involved, please email su.soc.palestine@lse.ac.uk
Posted by LSE SU Palestine Society at 07:04

Email ThisBlogThis!Share to TwitterShare to FacebookShare to Pinterest
0 comments


LSE SU Palestine Society
On Monday the 20th of February, students from LSESU Palestine Society re-enacted an Israeli checkpoint on Houghton Street, as the start of Israeli Apartheid Week. The re-enactment was to show the suffering Palestinians face on a daily basis, trying to live their lives. All students which took part, had pre-agreed to take part in the re-enactment and students who did not wish to be involved were not forced to take part. The re-enactment passed peacefully for two hours, with students responding incredibly positively to the action.
An hour and forty minutes into the stall, four students threw numerous water bombs at the wall which was being held up by several students who were members of the LSESU Palestine Society members. The balloons hit our members, with several of these missiles hitting these students directly in the face, who were as a result incredibly upset by the incident. The missiles  which were thrown knocked down one of the walls being held up by members of the society falling on these students. This could have potentially seriously injured society members and passers by, as they were heavy wooden panels which required holding up by students.
The LSESU Palestine Society fully condemns the actions of the four students who threw the missiles. The re-enactment and stall by the Palestine Society was completely peaceful, and the reaction of these students is unjustifiable. The actions of the four students presents a threat to the wellbeing of our societies members who were peacefully re-enacting the daily struggles of Palestinian people. As soon as the incident was over Palestine Society members returned to re-enacting the checkpoint.  This incident shows the victimization of peaceful protesters who were simply trying to draw attention to the cause of the Palestinian people. For students taking part in a peaceful protest to have missiles thrown at them for no reason is completely unacceptable. Many members of our society who were taking part in the re-enactment felt incredibly threatened as a result of the incident. We as a society call on management to continue to protect our right to peaceful protest on LSE’s campus.
Long Live Palestine! 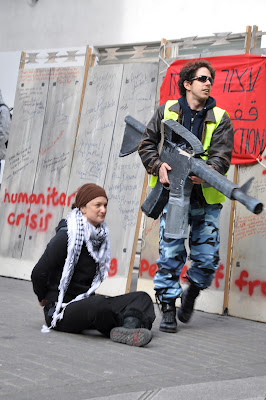 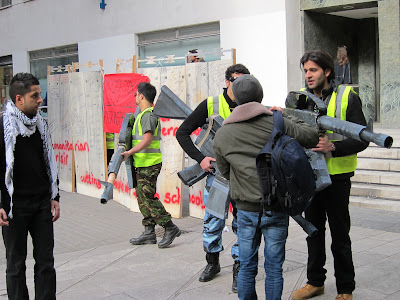 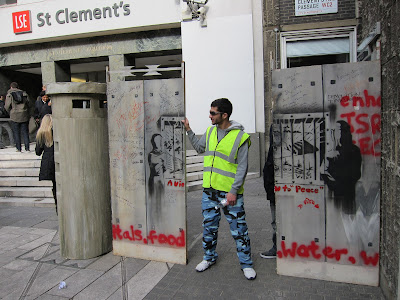