Email ThisBlogThis!Share to TwitterShare to FacebookShare to Pinterest
By Layth Hanbali
(UCL Friends of Palestine) 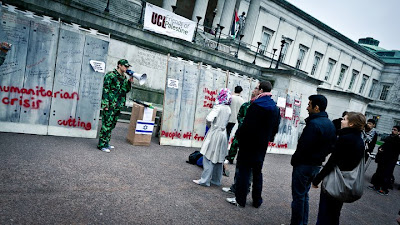 Last year, our president won the society funding by the union of a campaigns week, entitled 'Life Under Occupation'. Throughout the year, the other winners of the campaigns requests went unnoticed but we made sure ours was different. The plight of the Palestinians living in the West Bank is still widely misunderstood where many believe that it is one side fighting the other, that there are two sides to the conflict and that this is one of many wars going on around the world. In a situation where one side has total security control over the other, transfers populations illegally onto the other's land, places hundreds of roadblocks that stop the owners of the land but not the infiltrators, where the infiltrators get 5 times as much water as the owners of the resources and where the settlers have provisions to all public services and the Palestinians to next to none, it would be embarrassing to use the words "conflict" and "war". 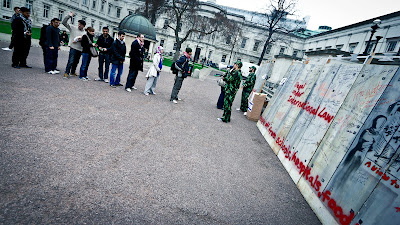 University Collage of London (UCL) Friends of Palestine tried to bring that truth closer to campus in our campaigns week. Despite very difficult hurdles being placed on our society by management, we still held a fantastic photo exhibition in the Jeremy Bentham Room under the leadership of our vice president. The shocking photos of Hebron, Bethlehem and Abou Dis provoked some thought into the observers who on the whole appreciated the exhibition. Those who were "appalled", however, were those we are never optimistic enough to convince anyway. The exhibition of the situation of Palestinians living under the brutal occupation ran all week and received great traffic throughout. 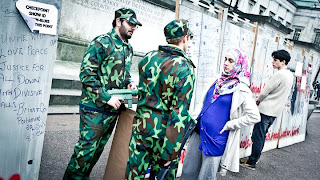 What I was personally most excited for was Wednesday. We decided to bring the Palestinian struggle against the illegal occupation and horrible oppression to UCL quad. After much thought, we decided to make a documentary out of it to bring it to the attention of as many people as possible, as only so many people will be walking through the quad, compared to the impressive viral nature of the internet. War on Want were kind enough to provide us with their brilliant replica of the wall being built illegally on Palestinian land and props and costumes were as convincing as we could obtain. Our two soldiers played the role fantastically and one certainly seemed to enjoy the switch from being the oppressed Palestinian to the arrogant soldier on the checkpoint, having even learnt common checkpoint phrases the night before. The harassment, beating and humiliation was made sure to be backed up by evidence, including the shocking scenarios of tens of Palestinian women who have given birth on checkpoints, with 1 in 2 still births. 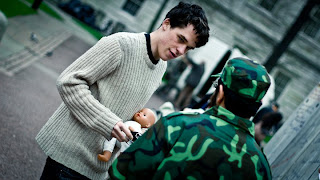 Our information desk worked relentlessly to make sure facts like that aren't forgotten and to deal with any confrontation which fortunately was minimal. I was delighted when someone who had once or twice heard of Gaza engaged in a lengthy conversation with me discussing the history of the issue, but even more delighted when an Israeli guy and I discussed practical ways in which this horrible situation could one day end. The end of our well-received stunt was not so happy unfortunately as a girl from Tel Aviv categorically said she supported the starving of Gazans as she compared it to "slapping the ant crawling up your leg". 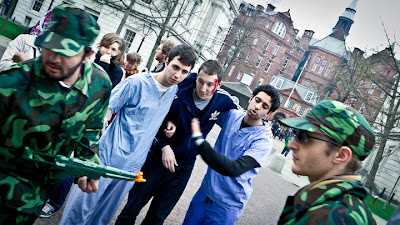 On the whole, it was a successful week which brought the suffering of Palestinians onto campus very well. The students on the whole were appreciative and supportive of our cause and we couldn't have hoped of running it much smoother. A testimony of our success was a hardcore Zionist requesting from the Zionist Battle Bus to come to UCL after the "bile" taking place on campus. We can only hope to carry on the good work to hopefully actually get a trip from what was this year a thoroughly unsuccessful Liebermann campaign.