Email ThisBlogThis!Share to TwitterShare to FacebookShare to Pinterest
8 comments
(KCL Action Palestine)
At its first meeting of the year on 20th October, the King’s College London Student Council voted overwhelmingly to condemn the involvement of the university in an EU-funded research project that also includes Ahava.
With 26 votes for, 5 abstentions and just 1 vote against, the councillors voted to “demand the immediate end of the university’s involvement in the project, and the rejection of the financial grant King’s has received for its participation,” in a margin of victory that surprised even the most optimistic campaigners. The students also voted to urge the university to re-evaluate its commitments to ethical research, and work towards establishing a formal ethical research policy.
The success at King’s follows a similar vote at the University of London Union (ULU) Senate meeting on 12th October, where senators passed a motion to “condemn in the strongest terms” the collaboration between King’s and Ahava, and to support the campaign launched by students and staff at the university. The margin of the vote was again outstanding – 9 votes for, 3 abstentions, and no votes against. ULU is the largest students’ union in Europe; any motion it passes, especially one concerning Israel-Palestine, is of great significance and sends out a clear message.
King’s College London is involved in NanoReTox, a research project under the guise of the European Commission and its Framework

7 research programme.Ahava is among the other partners in the project, as are Imperial, various other European universities, and the United States Geological Survey, which is part of the US Department of the Interior.
Ahava is a commercial cosmetics company whose premises are located on the illegal Israeli settlement of Mitzpe Shalem, around 10km inside occupied Palestinian territory in the West Bank. The company is also partly owned by the council of this illegal settlement. The illegality of Israeli settlements inside the Occupied Palestinian Territories (OPTs) under international law is overwhelmingly accepted by the international community, under the Fourth Geneva Convention, UN Resolution 446, ICJ rulings, and the official positions of the EU and the UK government. By accruing profits from, extracting resources from, and sustaining itself on, an illegal settlement, Ahava is complicit with Israeli violations of international law. And by working with them, King’s has become a partner to this complicity.
We have received messages of support from students in Gaza, and our petition has been signed by more than 800 people so far, including Remi Kanazi, Ahdaf Soueif, Ali Abunimah, Jeremy Corbyn MP, and Professor Noam Chomsky, who also sent a short statement of support. The petition can be found here:http://www.gopetition.com/petitions/petition-against-king-s-college-london-involvement-with.html. The official University and College Union (UCU) representative at King’s has also pledged his support for the campaign, and will work with us throughout its duration.
The overwhelmingly supportive stance of students and staff at King’s and beyond towards the campaign illustrates the legitimacy of its demands, and theillegitimacy of the university’s involvement with Ahava. We urge King’s to take this opportunity to demonstrate its commitment to ethical research and the integrity of international law.
This press release first appeared on the KCL Action Palestine blog, "Permission To Narrate", at http://permissiontonarrate.wordpress.com
https://www.facebook.com/KCLAP.Ahava.Campaign
kclactionpalestine@gmail.com
Posted by LSE SU Palestine Society at 04:22

Email ThisBlogThis!Share to TwitterShare to FacebookShare to Pinterest
0 comments
Nicola Alexander
(published in the LSE SU weekly newspaper, The Beaver)
The LSE Palestine Society has extended it’s academic programme with the Islamic University of Gaza to include lectures by LSE Professors. Academics in the Departments of International Relations, Law and History have agreed to participate in the scheme by delivering lectures via online video conferencing. 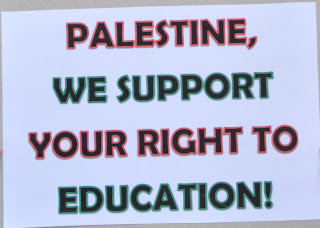 The decision to twin the LSE Students’ Union with the Islamic University of Gaza was passed at the Union General Meeting (UGM) on 26th November 2009, in order to “show solidarity with the students there who have had their campus bombed and their colleagues killed by the Israeli Occupation Forces.” Proposer of the motion, Samer Araabi, stated that the twinning was in “no way a sign of support for Hamas” but to support the people of Gaza and their right to education. Prior to this, the Students’ Union was twinned with the An-Najah National University in the Middle East since January 2007, but this expired in November 2009.

The academic programme was first established as part of the Palestine Society’s “Right to Education” campaign, launched in 2010, under which the UGM motion was also launched. Originally the programme just partnered LSE students with their counterparts at the Islamic University of Gaza in a mentoring initiative. Last year, LSE students partnered with “pen-pals” at the Middle-Eastern university using Skype and e-mail. However, the Palestinian Society has decided to invite academic involvement to provide better support for the students there.

Zach Sammour, last year’s President of the Palestine Society and main organiser of the academic programme, said that the partnership between the Students’ Union and the Islamic University of Gaza “was primarily intended to serve as a solidarity gesture between the students of the LSE and our counterparts at IUG. Subsequently, we have attempted to utilise the twinning to provide as much academic and social support to the students at the IUG as possible".

LSE Professors will be broadcasting their lectures live to an audience of students and academics in Gaza via video conferencing. This will allow the students there to engage directly with the Professors by asking questions. The syllabus for the lectures has not yet been confirmed by the academic staff.

Sammour commented: “The supporting materials will either be written by the lecturers themselves or sourced from open-access online libraries, and as such we do not anticipate there being any issues relating to infringements of intellectual property.” It is hoped that this term will focus on International Relations with two weeks of lectures given by Marco Pinfari, LSE fellow in International Relations. Lent term will focus on History and Law. Professor Gearty, who is involved in the Law lecturing for the programme said he is excited to be part of the project, commenting; “It is particularly great when an opportunity to engage in this way comes from an initiative launched by the student body itself. Education is vital in all societies but particularly those in which, for whatever reason, opportunity to learn is so restricted.”

The Palestine Society’s programme marks a significant milestone in international academic relations with students in Gaza. Sammour said, “owing to the intense restrictions on the freedom of movement inside Gaza, social partnerships such as student or academic exchanges are almost impossible to organise. “As such, the work we carry out is primarily geared towards providing academic support and services online, though we have also organised social initiatives with students at IUG, such as online video conferences and a ‘pen-friend’ programme last year where LSE students were paired with IUG students via Skype and e-mail.” he added.

The 2009 motion to twin the LSE with the Islamic University of Gaza faced large opposition from many members of the Israeli and Jewish Societies at the time, who launched a “Hummus not Hamas” campaign to create awareness of their perceived problems with the twinning. The Opposers of the motion alleged that Hamas had built the university, many prominent Hamas members had been educated at the University and that bombs and weaponry were built and stored in the basement of the establishment.

Aimee Riese, President of the Israel Society commented: “Although we do not agree about a formal twinning of the LSE with IUG, because of its alleged links with Hamas, we are of course committed to the principles of academic freedom. We support the sharing of academic ideas to promote dialogue, understanding and peace- values which the Israel Society stands for.”
Posted by LSE SU Palestine Society at 18:09

Another BDS Victory against Eden Springs

Email ThisBlogThis!Share to TwitterShare to FacebookShare to Pinterest
0 comments
By John Bennett
(Glasgow Caledonian University Palestine Society)
Glasgow Caledonian Palestine Society are delighted that Eden Springs no longer provide water anywhere on our campus.
Mayanot Eden (The Israeli parent company of Eden Springs UK) extract water from the Salukia spring and bottle in the illegal Israeli settlement of Katzrin, both in the illegally occupied Syrian Golan Heights. That Eden Springs UK and Eden Europe provide locally sourced treated water in no way absolves them of the crimes of the parent company and for us they are the same company.
As an Israeli company, even if it was not involved in these terrible crimes, Eden Springs must, we believe, be boycotted and divested from under the precepts of the Palestinian civil society call for Boycott, Divestment and Sanctions (BDS) against Israel until it adheres to International law by: Ending the Occupation of all Arab lands & dismantling the Apartheid Wall, Granting full and equal rights to Palestinians in Israel and acknowledging and facilitating the Right of Return for Palestinian refugees under UN resolution 194.
We view this not only from the perspective of the crimes against the Golani Syrians or the principles of BDS but the dual, often inter-connected impact of illegal settlements and Israeli control of vital water resources on the life of Palestinians (in terms of water) the Gaza Strip and the West Bank. Every time we saw that Eden Springs logo we would think of Palestinian Bedouins in the Jordan Valley clinging to survival in absence of water re-routed to the settlements, our friends in Aida Refugee camp going weeks or months without water and the situation we are aware of in Gaza.
Statement from student president, Matte Andrews:
“I am delighted to see that the hard work and diligence of both students and University staff has led to the removal of Eden Springs from the GCU campus. The campaign began in the 2007-08 Academic Session when students introduced the motion to Student Parliament, effectively mandating the Executive Committee to put pressure on the University to cancel its contract with Eden Springs for the supply of drinking water and coolers. Since then successive Executive Committees and the Palestine Society have been lobbying for the removal of the supplier whose Israeli parent company, Mayanot Eden markets and distributes the water from the Golan Heights, an area of Syria, illegally occupied by Israel since 1967 and move to more environmentally sustainable piped-in water. The success of this campaign demonstrates the deep commitment of GCU students and staff to global justice, ethical procurement and environmental sustainability”
We thank Matte for his statement and would add thanks to his predecessor, who on the back of the occupation of nearby Strathclyde Uni during the Gaza massacre (from which they got rid of Eden Springs) got a motion through parliament to get Eden out of the Student Association building with immediate effect as well as to campaign for campus-wide removal. We’d also thank last terms president for keeping this going and giving some legitimacy, if you like, to the Palestine Societies campaigning.
Posted by LSE SU Palestine Society at 17:54