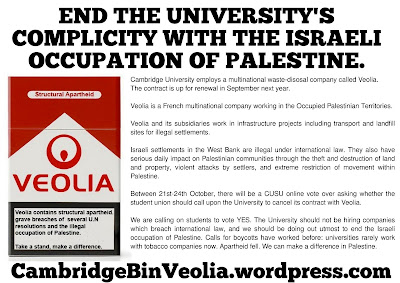 Students at Cambridge have voted to call on the University to cut ties with a company implicated in Israeli human rights abuses.
The vote calls on CUSU (Cambridge University Students Union) to campaign to have the University cut ties with Veolia, a company involved in infrastructure projects in Israeli settlements, and employed by the University on a waste disposal contract. The referendum, which closed yesterday, passed with a majority of 58% to 41%: there were 898 votes yes, 637 votes no, and 21 ballots spoilt. While a strong majority was in support, the referendum was inquorate: 7.2% of the student body voted, short of the 10% required.
Students involved in the campaign pledged to continue the campaign to ensure that Veolia’s contract, which expires in September 2012, is not renewed.
Veolia’s activities in the West Bank include bus and light rail services and the Tovlan Landfill site, all serving illegal Israeli settlements. In recent years, the international community has targeted Veolia as a company profiting from the Israeli occupation. Veolia has lost contracts worth more than €10 billion since 2005, including, just a few months ago, a £300 million contract in Ealing, London. The actions against Veolia are part of a broader international campaign following the Palestinian call for boycott, divestment, and sanctions against Israeli companies and institutions. The Cambridge campaign against Veolia received letters of support from Palestinian lecturers and students, a group of 30 Cambridge academics, and the International Jewish Anti-Zionist Network.
Daniel Benjamin, a student involved in the campaign, said: “With this vote, Cambridge students make a strong statement against Veolia’s criminal actions in the Occupied Palestinian Territories. We won’t stop fighting until Veolia is off campus, but this vote itself is a fantastic show of support in the broader campaign for Palestinian human rights through boycott, divestment, and sanctions against Israeli companies and institutions.”
Owen Holland, a student involved in the campaign, said: “The impressive turnout shows significant student support for the campaign. We are concerned with a number of irregularities in the vote, such as lies in the ‘no’ flysheet that went uncorrected, a lack of ballot boxes in colleges, and a number of students who found themselves unable to vote online. Though the referendum did not meet the threshold to become CUSU policy, we will be campaigning to have CUSU adopt it anyway and push the University to drop its contract with Veolia.
Contact: cambridgebds@hotmail.co.uk
Posted by LSE SU Palestine Society at 10:33

Email ThisBlogThis!Share to TwitterShare to FacebookShare to Pinterest
8 comments
By Liam O'Hare
(University of Edinburgh)

In a victory for the Palestinian Boycott Divestment and Sanctions (BDS) movement, Edinburgh University Student Association (EUSA) yesterday overwhelmingly passed a motion through its Student Council to block their contract with security firm G4S, and to lobby the University to follow suit.
G4S currently provide security services to Edinburgh University library, which prompted Students for Justice in Palestine (SJP) to begin a campaign to force the University to tear up its contract with the security firm. It was then recently discovered that EUSA were also in the process of hiring the firm for money collecting services. This led to a motion quickly going before Student Council and it was clearly passed, meaning the Union's trustee board must now look for an alternative.
The Danish-British security firm have been under huge scrutiny following the disclosure earlier this year of their role in Israel's occupation by 'Who Profits?' 1a project by the Israeli Coalition of Women for Peace. The group revealed that the company supplies equipment and services to Israel for use at checkpoints, police stations, and settlements in the occupied West Bank and at Israeli prisons. Over the past month Palestinian prisoners have embarked on an open-ended hunger strike to protest the conditions in G4S supplied prisons.
In March earlier this year, due to pressure from the BDS campaign, G4S announced that it would exit from some of its contracts in the West Bank.2 However it will still deliver security services to illegal settlements in the West Bank and prisons in Israel.
G4S are also involved in running 4 detentions centres in the UK and received over 700 complaints against it in 2010. 3 The company could also faces charges over the death of Jimmy Mubenge, who died whilst in the process of being deported and in G4S custody. 4
The campaign to get G4S off Edinburgh University campus is part of a wider campaign for BDS by the SJP society on campus. Recently the group shut down the Careers Fair at the University for a second time in protest of the presence of arms dealers BAE there.5 Last March, at a EUSA General Meeting, a motion to Boycott Israeli Goods was passed by a landslide, with over 90% of the students present voting in favour.6 This came after the society shut down a talk by Ishmael Khaldi at the University, an advisor to Israel's racist foreign minister Avidgor Lieberman.7
The society, working now with EUSA and other ethical campaigns on campus, will now demand that the University's contract with G4S is ripped up and for no further contracts to be given to those companies involved or complicit in the continued suffering of the Palestinian people.
For Media Contact Liam on 07519575060 and edinburghsjp@gmail.com