Email ThisBlogThis!Share to TwitterShare to FacebookShare to Pinterest
By Daniel Lindley and Malia Bouattia
University of Birmingham Friends of Palestine 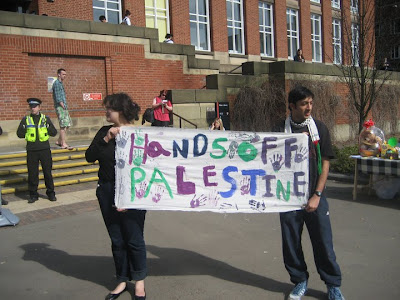 The University of Birmingham is something of a Zionist outpost in British Higher Education. It also has the largest JSoc in the country whose leadership is dominated by Zionist activists. Just a month ago the ominous EUMC definition of anti-Semitism was adopted as legislation by the student union and the university’s Friends of Palestine society narrowly avoided severe sanctions after one of our guest speakers made a comparison between Israel and the Nazis (a comparison we’d made clear we didn’t endorse) and were put before a disciplinary panel who demanded we issue an apology. The panel included a student who had written for the Federation of Zionist Youth’s magazine (in one article describing her meeting with Ariel Sharon as an unforgettable experience), yet she did not declare a conflict of interest thus casting serious concerns over the panel’s decision. However, after a long and tiresome campaign, we managed to bring the case to appeal and the committee acquitted us of all charges.

After these aggressive manoeuvres the Zionists performed a two-faced shift to Orwellian propagandising for the state of Israel; hosting 25 Israeli students and setting up a “Peace Tent” on campus preaching that Israel wants coexistence in Birmingham whilst it continues to bomb and murder Palestinians in the occupied territories and steal their lands. The entire campus was chalked from the early morning with statistics on Israel’s crimes and clear proposals as opposed to the empty “We want peace.” But our main action was re-enacting an Israeli checkpoint outside the university’s main library near their tent, which we decided to do with inspiration from a similar action in Columbia University in the US, and to spread awareness of the cruel and humiliating occupation Israel continues to operate in the West Bank. Students from Warwick, Nottingham and Leicester also participated in the stunt. The local PSC and Stop the War also came along to show solidarity and helped distribute informative leaflets during the performance. 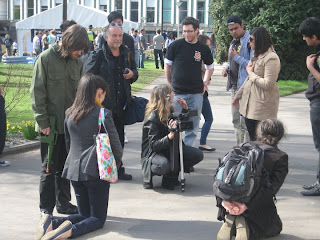 There were many students who showed interest and took the time to speak to the participants. Problems arose when the Israeli TV camera crew approached us and started filming everyone involved. They were also asking us questions about which group we were all a part of, whether we were going to hold anymore stunts, why checkpoints exist, what we thought about the conflict and how it would end. Several police officers were also in attendance, who told us they were there “in case it kicks off tonight” when asked why their presence was necessary. Many of the students who approached us expressed that they felt intimidated by the cameras and were worried about what the footage was going to be used for. It was clear that because attention was diverted away from the tent, the Zionists wanted to use the cameras to put people off from approaching us and inquiring about the action. 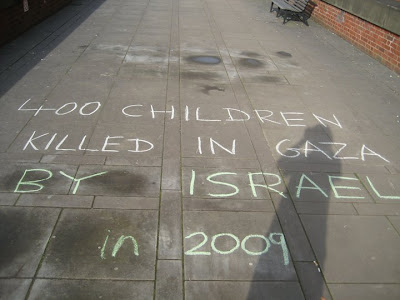 Overall the events were a success and many of the students and visitors on campus witnessed the Zionist attempts of intimidation which contradicted their “peace” initiative. We reinforced that our approaches remain non-violent and that we have no intention of intimidating students as opposed to the continuous harassment and confrontations we experience from Zionists on campus. Our principle aims are to liberate and seek justice for the Palestinian. We therefore also wanted to contribute to raising awareness about Israel in the hope that Zionists may take the first step and admit their state’s inhumane and illegal actions are wrong and then perhaps this would be the first step to discussing genuine peace. 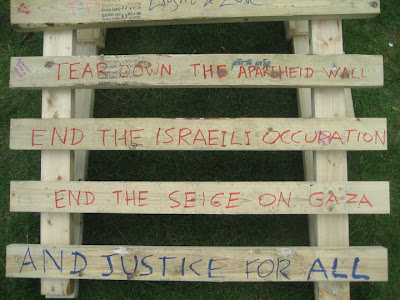 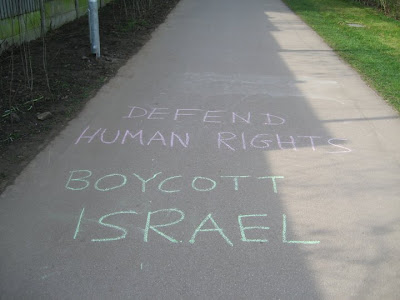