Vigil for Gaza at the LSE

Email ThisBlogThis!Share to TwitterShare to FacebookShare to Pinterest
Yasmin Ahmed
LSE Palestine Society
On Thursday 15th March, the LSE Palestine Society held a candle-lit vigil on campus to mourn the victims of Israel's latest deadly bombardment of Gaza. The attacks, which began on March 9th, continued for five days, leaving 27 dead and dozens injured. Those dead included 12-year-old schoolboy Ayoub Useila, killed by an airstrike which also injured his 7-year-old cousin.
Twenty-seven candles were lit on Houghton Street just before sunset to mark the lives of those killed, and a two-minute silence was observed. A black banner with the words "Silence Is Complicity" was also displayed throughout the day, referring to the media blackout surrounding the humanitarian situation in Gaza and the complete lack of observance paid towards the relentless attacks upon it and its population of 1.5 million. 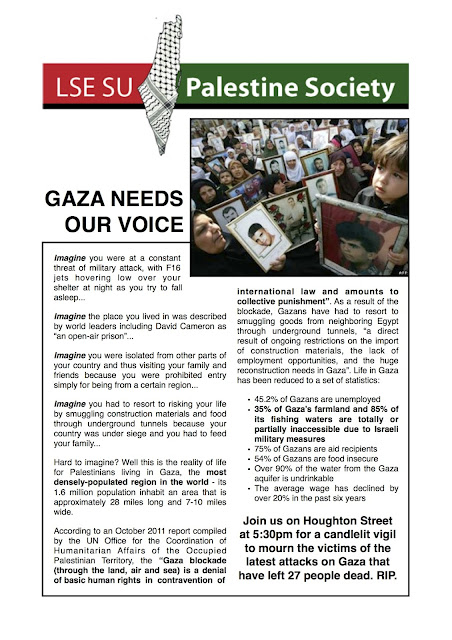