Email ThisBlogThis!Share to TwitterShare to FacebookShare to Pinterest
Glasgow University Palestine Society
In September 2011 Glasgow University Palestine Society relaunched a campaign which began several years ago to encourage the University to cancel their contract with Eden Springs.  Eden Springs UK are a subsidiary of Mayanot Eden, an Israeli company which extracts water from illegally occupied Golan Heights, bottling the water in nearby settlement Katzrin. Eden Springs has become a major target in the Boycott, Divest, and Sanctions movement across the UK and Europe, responding to the call from Palestinian civil society. 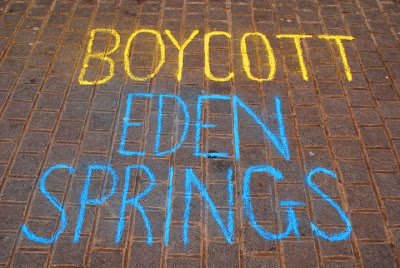 The campaign consisted of public meetings, a student petition, an appeal for support to the Student Representatives Council, and a letter from staff at the University which voiced their support for the motion to cancel the contract.  Following a report submitted to the University in January 2012, a meeting was arranged between members of the Society and the Principal of the University, Anton Muscatelli.
The meeting took place on 13th March 2012.  The Principal assured the Palestine Society that the University acknowledged the concerns of the students and staff, and to this end would make a commitment to refraining from any future contract with Eden Springs.
The agreement from the University follows similar commitments from other Scottish Universities including Strathclyde University, Caledonian University, University of Edinburgh, Dundee University and others.  Similar campaigns have been run at Universities and Colleges across the UK.
Glasgow University Palestine Society would like to thank everyone who supported the campaign by signing the student petition and staff letter.  In addition to this, we would like to thank all of the individuals who assisted the campaign through offering advice and resources.  Thanks also to individuals who endorsed the campaign, and organisations such as Boycott From Within for their endorsement.
We consider this success significant not just for Glasgow Palsoc, but for all groups campaigning for Boycott, Divestment and Sanctions of Israeli companies internationally.  The Palestine Society at Glasgow University will continue to pursue BDS campaigns against Israeli companies, the existence of which propagates Israel’s ongoing system of occupation, apartheid and oppression of the Palestinian people.
Posted by LSE SU Palestine Society at 15:51