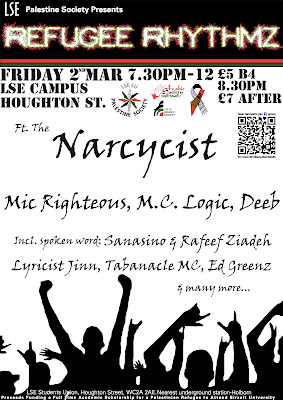 On Friday 2nd March, the Palestine and Arabic societies of the LSE and Kings' College joined forces to bring a night of hip hop, spoken word and poetry.

The lineup included live performances from renowned Iraqi-Canadian rapper The Narcicyst, up-and-coming British-Iranian MC Mic Righteous and Egyptian Arabic rapper Deeb, as well as a number of new up-and-coming UK-based artists. Speakers included Rafeef Ziadah and Sanasino and stalls were also available on the night, selling merchandise.
We would like to express our thanks to everyone who made this event possible and to the artists and poets who performed on the night, which raised over £500. Proceeds from this fundraising gig will go towards funding a full-time academic scholarship for a Palestinian refugee to attend Birzeit University, one of the best academic institutions in Palestine.
List of performers: The Narcicyst, Mic Righteous, Deeb, Logic, Ed Greenz, Rafeef Ziadah, Sanasino, Lyricist Jinn, Tabanacle, Caspa.
Posted by LSE SU Palestine Society at 16:36